It was becoming harder and harder to keep going. The Schwarz Alm Hotel in the Austrian town of Zwettl was showing its age, and small problems kept piling up. ‘Selling the hotel was out of the question, because the family had put so much heart and soul into it,’ says Karl Schwarz, the owner of the hotel. Thanks to financial support from the provincial government and the EU, he was able to turn what used to be an old mountain hut into a well-appointed four-star hotel offering local products and activities in the region. 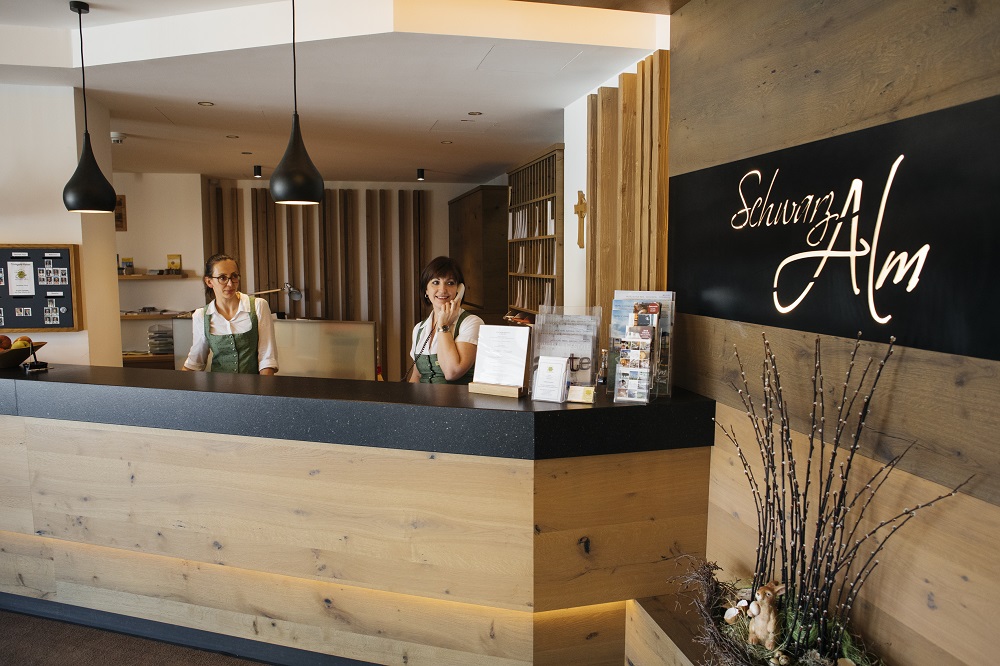 At first, the plan was to renovate the hotel bit by bit over the course of several years. The owners soon scrapped this idea, however. As Karl Schwarz explains, ‘Our hotel is a place of rest and relaxation. Our guests wouldn’t have been too happy about constant construction work.’ Eventually, a total amount of EUR 5.6 million was spent to renovate the hotel in one fell swoop — and in record time. ‘Thanks to an unusually mild winter, we were able to complete the construction work in the period from October to May, so we only had to close the hotel briefly,’ Schwarz proudly points out.

During this period, 25 rooms in the old building were renovated and brought up to modern four-star standards. The reception, lobby, kitchen and restaurant were thoroughly overhauled and the oil and gas heating was replaced with a modern wood pellet system. An annex was built, increasing the hotel’s capacity by adding ten additional rooms. A new indoor swimming pool with panoramic views was constructed to complement the hotel’s spa facilities. It is in large part thanks to these modifications that the hotel has become a popular year-round choice for its guests. ‘In the past, the months from January to April used to be a tough stretch for us. But now, we stay in the black every month,’ says Karl Schwarz.

„Selling the hotel was out of the question, because the family had put so much heart and soul into it.“
Karl Schwarz, owner of the Schwarz Alm Hotel

The financial support provided for this IGJ/ERDF project has allowed the hotel, which is operated on the basis of a lease contract, to strengthen its position as a leading business in the Zwettl area. ‘Looking back, I have to say that we really notched up the quality level. And in 2017, our first full business year after the completion of the project, we doubled our revenues compared to the years before the renovation. This level of success exceeded all our expectations,’ says Karl Schwarz, who also owns the Privatbrauerei Zwettl brewery. The quantity of goods purchased has increased significantly, along with the amount of products that the hotel procures regionally. Another important benefit of the project is that the hotel was able to keep its 30 existing employees and even create ten new jobs.

One of the key features of the hotel, an oasis of calm and culinary delights in Austria’s picturesque Waldviertel area, is its regional focus. This ranges from the food served — featuring local produce such as poppy seeds, carp, potatoes and herbs — to numerous regional partnerships. For example, the hotel offers its guests a special package of beer-flavoured treats, including an exclusive guided tour of the Zwettl brewery, a hot beer massage in the evening and a beer-tasting dinner. As an additional activity, hotel guests can also participate in trips to local hop farmers.

The hotel is not only a perfect place for a short vacation, seminars and family get-togethers, but also a great wedding location: on two days every month, the Zwettl town officials are available to perform civil weddings at venues outside the town hall.